Hilarious hotel antics - and how to avoid them

You only have to have been working in the hospitality industry for a very short time before you have a hilarious dinner time story to tell. Usually it’s something a guest has said or done, or something that has gone completely wrong from management to front of house staff. In fact, the world of hospitality humour is so vast that some clever writers even made an entire series about what could go wrong in a hotel:

Well, it is no different for some real life hoteliers – we will keep them all anonymous because we don’t all want to share our more embarrassing stories on the net – but they are real, and the situations (although they seem like a comedy script) are very real too. The only thing that's not 100% real are our recreations using guest feedback technology; the “what might have been.”

Excuse me waitress, is that sewage on the window?

Our first story starts during Sunday lunch service at a small but busy family-run establishment. Hotel guests and restaurant patrons are enjoying a leisurely afternoon of warm meals, fireside coffees and some afternoon sports showing on the lounge television.

All of a sudden, a pipe affixed to the outside of the building carrying sewage from the rooms above comes free of its fixtures and plummets into the garden outside the dining room window. The force of the impact expels the pipe’s  contents all over the outside wall, windows and manicured flower garden. Immediately the manager and owner sprang into action. The plumber was phoned and all hands were on deck, surreptitiously wiping down the windows while ensuring the guests remained well fed, watered, wined and waited upon, and oblivious to the filthy fiasco outside.

The plumber arrived, the windows were cleaned,  and all of the customers were kept unaware of the chaos that had ensued outside. All the staff were grateful that none of the windows had been open that morning, and ultimately everyone went about their business as usual.

In the aftermath of the messy Sunday, the hotel’s plumber discovered that someone had decided to flush a plastic takeaway container down the toilet. “Why not put it in the bin?” I hear you ask. The hotel, being an inn with an integrated restaurant, had a strict “no takeaways in the hotel rooms” policy, and, so as to not land himself in hot water with management, the guest thought the best way to dispose of the evidence of his edible contraband was to flush the container down the toilet. And the rest is history.

So what does this have to do with guest feedback management? Had they been keeping a close enough eye on their guest feedback, the hotel in question would have learnt that the demographics that their marketing and location appealed to were families and young couples on a budget, most of them looking to be able to bypass the higher restaurant prices, indicating a need for self- catering accommodation. Had they listened to their feedback and used their data correctly, they could have converted certain rooms into self-catering options, thereby increasing occupancy, being able to charge a higher room rate for the added amenities and being able to completely bypass the sewage soaked Sunday incident.

Our next story takes us to a remote hotel that, due to its proximity to some budding industries, has recently found itself busy with frequent business travellers. However, this story features one of the hotel’s more traditional target markets – weddings.

The night before her big day, a beautiful blushing bride begins to settle into one of the most elegant and dignified rooms in the hotel.  It's a little chilly, so she unrolls the spare blanket strategically placed in the antique cupboard, perfect for cooler autumn evenings. But what should fall onto the bed but a pornographic DVD.

This story was relayed to management by a bridesmaid, who insisted on the now really blushing bride’s behalf that other sleeping arrangements be made, as housekeeping had obviously not been as thorough with the room as they should have been, and the blankets were probably in need of a bleaching (which is one of the reasons hotels sheets should be white).

Management, conscious of the need to preserve the illusion of perfection, especially among the ultra-critical wedding market, immediately offered alternative accommodation, and all was well with the rest of the event.

How could guest feedback possibly have helped prevent this? If the hotel had monitored their guest feedback, and used big data to track trends in guest profiles, they would have known that one of their largest groups of guests were the business travellers, even though their marketing was geared towards romantic country getaways. With this understanding, they could have upgraded the TVs in the rooms to smart TVs, offered access to quicker internet connections and made the rooms more tech-friendly. Allowing him the ‘satisfaction’ of being able to stream all of these critically acclaimed movies online might just have meant the repeat business traveller wouldn’t have needed to bring a hard copy of his favourite film. 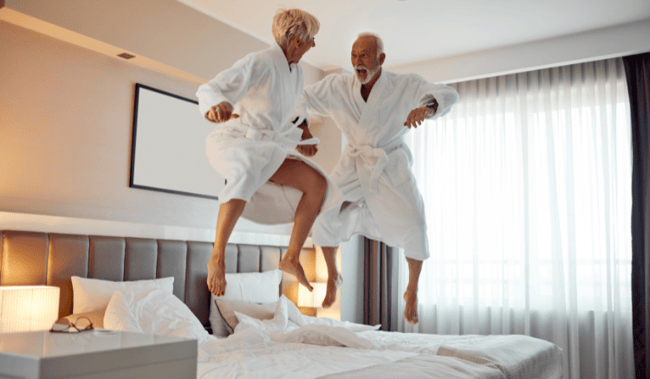 Excuse me manager, where is my picture?

So we move on to another romantic story; a real Romeo and Juliet moment. Two lovers check into a quiet country hotel. A mature woman makes the booking and checks in, while her significantly younger lover surreptitiously flits up the stairs to the room, dressed in a cap and glasses like a celebrity avoiding paparazzi.

The staff don't see them again for the entire duration of their stay, they request meals to the room, drinks to the room and hang the “Do not disturb” sign on the door handle. It all seems like a Mills and Boon romance novel, until check out.

Upon their departure, these taboo lovers had decided to completely remove the antique artwork from their room, possibly wanting a memento of a weekend well spent. In a very successful attempt at stealth,  they had hacked the canvas picture out of the wooden frame, and left the frame still hanging on the wall completely empty.

Although already unusual, the story gets even more involved. Housekeeping, during their room turnarounds, didn't even notice the missing picture, perhaps assuming that the frame had always just housed a frayed material border and highlighted the beautiful paint job of the wall behind it.

So, when the next lot of guests check in, they enjoy a lovely and peaceful stay. They do, however, feel it necessary to bring the missing picture to management's attention.

What could have been done to avoid the loss of the picture ? Nothing really. However, we could learn from our guest feedback that perhaps the housekeeper's attention to detail is a little lacking, perhaps offering employee of the month incentives for individuals or departments that get mentioned in guest feedback can encourage each employee to go that extra mile, like checking those all important picture frames when guests check out.

Excuse me concierge, can I go for a run?

If our last story was a romantic one, this one is the opposite. Mr. and Mrs. John Doe check into a nice hotel, hoping to enjoy a well-deserved break. Moments after checking in, the two went up to their room and they weren't seen again for some time. But, as we all know, even the best laid plans don’t always work out…

Obviously we don’t know what ensued, but the wife came back to the reception desk at around 11pm asking if she could have access to the gym. The concierge, assuming she was a night owl, who liked to get her workouts in between 11pm and the early hours of the morning, happily obliged.

At around 3am, the concierge, sure that this fitness fanatic would be done with her midnight workout, went back up to lock up the gym. But lo and behold, the woman was still there on the treadmill. No, she wasn’t training for a marathon, she had set up a makeshift bed for herself on the treadmill, and she was sleeping peacefully.

After a discussion with her, and just gently letting her know she won’t be able to sleep on the treadmill for the entire night, the concierge discovered her and her husband had had a row during their stay and she could not share a room with him any longer. The very accommodating hotel staff made sure she got the last remaining room for the night so that everyone could have a comfortable night's sleep.

So what could have been done differently with a guest feedback management system? Well not much in this case, but we are sure that the wife in question was very grateful for all of the extra effort the staff displayed and we are sure that, given the chance to complete  a post stay survey, she would have rated the friendliness and efficiency of the staff very highly. And those are the kinds of reviews that can up your ratings on booking platforms, review sites and even encourage future bookings from word of mouth advertising and social proof.

It’s tough to run a hospitality business, there is no pause or rewind button to press when things start to go horribly wrong. But if we follow our guest feedback closely and learn to understand where there may be gaps in our understanding of what guests expect, what is actually happening and where service delivery is failing, we can learn to use that feedback like a crystal ball to see what may happen next and mitigate the severity of the problems as they may occur.